Transportation system in Firozabad is extremely improved. Local residents as well as the tourists here are offered with wide ranges of transportation options. Most importantly the cost of transportation is quite fair and within the budget of common people. While communicating from one corner to another corner of the city, there are different options like buses, autos, taxis, trains etc. 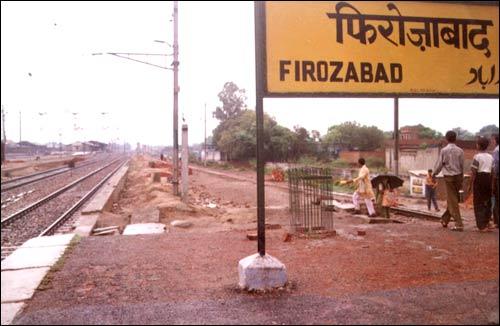 The roads are more or less well maintained and the people have multiple options to commute from one place to another in Firozabad. The existing mode of transport includes buses, taxis, auto rickshaws, etc but people can also avail the facility of railway transportation because the local network is well developed here. The city and its adjoining areas are expected to witness some revolutionary changes in the transport system within next few years.

Bus services in Firozabad are administered by the autonomous authority called Uttar Pradesh State Road Corporation. All these buses run on the power of compressed natural gases, hence it prevents air population to large extent. There are multiple bus routes in this city connecting different places here. There are sufficient bus depots and conveniently planned bus stops in the city. Some private travel agencies also arrange short and long distance tours for the tourists here. People can also enjoy the facility of inter-state bus services to travel to different neighboring states. The tourists mostly avail the bus services in Firozabad to visit places like Jaipur, Haridwar, Gurgaon, Ajmer, Gwalior, Agra, New Delhi, etc.

Other roadway transportation options are: Autorickshaws, Tempos and Taxis, both prepaid and Radio Taxis.

Autorickshaws and tempos in Firozabad are the one of the most popular mode of communication. Though tempos are the oldest mode of transportation in Firozabad but autorickshaws have now gained tremendous popularity here. Tempos are still running within the city on hiring basis but autorickshaws offer convenience and affordability because they run on sharing basis. People can also book an entire auto to travel in the city. It is always recommended to travel in an auto where the fare is displayed on a meter. It is advisable to board a non metered auto and tempos after fixing the rate of transportation.

Pre-paid taxis are the most popular when it comes to the option of taxi in Firozabad, but nowadays radio taxis have also become popular. Radio taxis are available 24/7. Travel agencies provide this facility and it is always recommended to fix the contract price before boarding the taxi.

In Firozabad there are numerous local stations. The railway network in Firozabad offers the most convenient mode of transportation within the state. People can avail this facility for travelling to shorter as well as longer distances. There are number of suburban railway stations where daily commuters travel to and fro for different purposes. So, railway communication is considered to be the most affordable mode of transportation for common people. Tourists can also avail the services of local train to travel the adjoining areas on an affordable rate.

Government has plans to introduce metro services in Firozabad. But right now the metro plan is just in the initial phase, nothing concrete has been decided.

Firozabad is located in an extremely advantageous location and it is closely located to some of the major Indian cities. The approximate distances from Firozabad in KM are given below

Firozabad is surrounded by many rivers and the steamer services are available through these rivers. The city is connected to its neighboring areas through the following rivers: Upper Ganga Canal, Yamuna River and Kaliyar River.