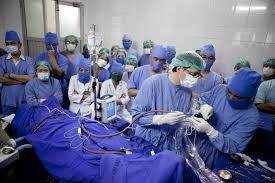 With more than 25 lakhs population, Firozabad is one of the most densely populated as well as a core industrial and agricultural region of Uttar Pradesh, with most people living in rural conditions. The city is well known to be struggling with one of the highest infant and young women mortality rates in the country. Most children, especially in the rural and backward areas fall prey to malnutrition and other life threatening infant illnesses. With these challenges in place, a well structured healthcare system is crucial to the development of the society in Firozabad.

A cycle of poverty and illness prevails in most rural parts of Firozabad, with teenage girls being married off subjecting them to malnutrition that results in deaths during childbirth. The UNICEF is currently looking into the means of checking the maternal mortality rate with support from the Uttar Pradesh Government and other NGOs working in the area.

Firozabad is popular for having one of the highest fertility rates in Uttar Pradesh, with each family having at least three to four children, pushing the area’s population towards an explosion, resulting in poverty and increased number of child labourers. Many children from poor families in the industrial belt of Firozabad are often forced to work in the glass bangle factories to help their families financially, thus ending their education in most cases. Though child labour is not permissible by law in the whole country, the enforcement of these laws are rarely possible in poor households and small industries where they are employed. Also, the bangle making process involves steps that pose health hazards for these children in the long run.

The Indian Environmental Society along with a few charitable organizations are working on projects to provide medical aid through free health camps to generate awareness and also to curb the risks of environmental pollution faced by these child labors. Health camps are also being organized by the Government of Uttar Pradesh that are specifically aimed at providing medical support to children working in the glass industries in Firozabad.

In the past few years, the Disha Child Program, especially designed for the rehabilitation of children working in the glass industry in Firozabad has been successful in reducing malnutrition and severe health issues to a considerable extent. The project also aims at providing awareness programs for families of these children and more than 1500 children have been successfully withdrawn from working in this hazardous environment and put back to schools.

Another critical issue faced by Firozabad’s health infrastructure is the high risk of polio transmission. Challenges like high birth rate, poverty, illiteracy and religious resistance to certain extent make the area a difficult place to carry out the polio campaigns. In the past decade, Uttar Pradesh as a whole has been the source of polio infection and has majorly contributed to the number of children crippled by the virus in India. UNICEF, along with partner NGOs like the Bhartiya Viklang Seva Sanstahan, play a vital role in driving public healthcare campaigns in Firozabad by marking the children below five years and developing vaccination teams to visit every household, especially in the high risk areas of rural Firozabad and work their way through many challenges, one of them being parental resistance due to fear and misinformation.

Another serious problem posing health hazard in Firozabad is water pollution and arsenic contamination in drinking water. Since the past few years, the area has been subject to serious water pollution, mainly caused by the discharge of hazardous wastes by the industries in the area leading to a portable water crisis. Using water purifiers or packaged drinking water is a safe option but not for the poor population. A number of NGOs like the Sri Sai Baba Seva Sansthan and Natraj Vikas Sansthan have come forward to install hand pumps to aid drinking water resources in rural and backward areas of Firozabad.

Firozabad has a number of government and private health care facilities, many of which offer state of the art medical facilities ranging from fully equipped OPDs, modern Operating Theaters as well as all the specialty departments such as orthopedics, gynecology, cardiology, neonatology, oncology, pediatrics, dermatology, ophthalmology, urology, gastroenterology and also specialty care services such as infertility treatments, high risk pregnancy and maternity care under the supervision of qualified doctors and medical technicians.

Apart from specialty hospitals, a number of diagnostic centres and pathological laboratories support the health care system in Firozabad. These centres provide all the facilities that any other standard centres provide, like pathological tests for blood, urine, stool, biopsy, x-ray, MRI, citiscan, ultrasound, mammography etc. In this respect, mention may be made of the Subhash Pathological Laboratory under the famous Dr. Lal Pathlab, situated in Gandhi Nagar, Om Diagnostic and Pathology Centre under Religare and Dr. K K Jain Pathology Centre in Jalesar Road.

Since the Firozabad area is inhabited by a fair percentage of rural population, the modern and medically advanced facilities like allopathic treatments are often not very popular among the backward communities. The medical facilities which are regarded as non side effect medicines are preferred by certain people among which homeopathy and ayurvedic or unani medicines deserve special mention. Many people are known to resort to parallel medicines for common colds, skin rashes, hair loss treatment, weight loss treatment, tonsils, arthritis, migraine and many other ailments that do not require a very radical treatment process followed by allopath. The Gayatri Homeopathic Clinic and Pharmacy, situated in Nagla Bari near Bypass Road and Patanjali Chikitsalaya under the Divya Yoga Mandir in Jaleshar Road near Arya Nagar are worth mentioning.