The ancient city of Firozabad is famous for its glassware industry which employs a large number of skilled and semi-skilled laborers in and around the region. Firozabad is one of the chief exporters of glassware items such as lamps to various parts of India as well as foreign nations such as Spain, France, Dubai and Kuwait. The district owes its name to the famous Mughal Mansabdar, Firoze Shah.

Firozabad is situated in North-Central India in the western part of Uttar Pradesh. It is at a 27.09 degree latitude and 78.24 degree longitude and spread over an area of 2361 sq. kms (as measured in the year 2001). It is located at the northern side of the Deccan plateau and is placed 540 feet (164 meters) above sea level. The entire district of Firozabad, of which the city of Firozabad is a part, is a vast level plain. In the southern part of this district, you can find rivers Yamuna, Sengar and Sirsa flowing through. 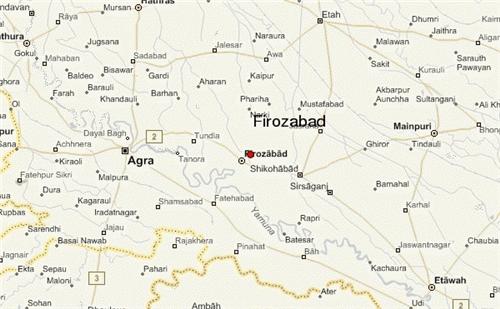 Topography and Climate of Firozabad

The climate of Firozabad is extremely dry, due to its proximity to the state of Rajasthan. The summer season starts very early here and residents experience extremes of temperature. During the summer months, the temperature of Firozabad district reaches to around 47 degree Celsius. In winter the temperature can go down to as low as 2 degree Celsius. Monsoon usually begins in the beginning of July and the average rainfall is 751 mm. The winter months are almost dry, with virtually no rainfall. The highest recorded temperature in the district was 48°C and the lowest was -1°C.

The weather in Firozabad is pleasant during the winter months. The period from October to February is the best time to visit the place, which boasts of attractions such as Jain temples, Tomb of Firoze, Kalan Mosque and of course, the many glass factories that produce exquisite glass items including glass bangles, kangans and other jewelries for married women (locally referred to as ‘Suhagin’).

Firozabad has recently begun to suffer from an acute problem of water pollution. Local water pollution has been associated to industrial waste discharge which has resulted in water becoming partially unfit for daily needs. Packaged drinking water and water purifiers are taking care of regular consumption of the people of Firozabad. Even air pollution has begun to occur and the various industries in and around the region have been accused as the main cause of polluted air and acid rain.

Forests and Minerals of Firozabad

The total forest area in Firozabad is around 8646 hectares. No minerals have yet been found in the region.