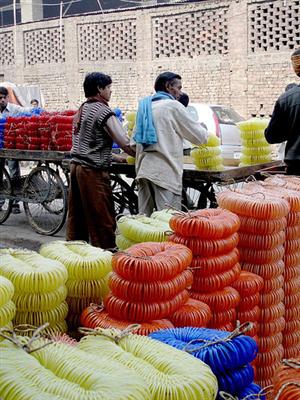 Firozabad is a popular town of Uttar Pradesh. The town is located in Firozabad district and is best known as “The Bangle City” or “City of Glassware” because of numerous glass manufacturing units that have started operating since ages. Located in the western region of Uttar Pradesh. The distance between Firozabad and Agra is about 45 km and 286 km from Lucknow, the capital city of Uttar Pradesh. Firozabad is also known as “Suhag Nagar” as it is famous for producing varieties of items used for ornamentation by the brides or suhagins. Firozabad is also known as “World Capital of beads” because of huge production of glass beads that get used in jewellery items, cloths and other accessories. Dinner sets, chandeliers, toys, showpieces and different other glassware made here in Firozabad get exported to various parts of the world.

Firozabad was earlier popular as “Chandwar Nagar” but it got its recent name when one of the generals of Emperor Akbar named Faraz Shah came here and ruled the place during 16th century. Firozabad was an important seat during Freedom Movement in India and was visited by eminent leaders of that time including Mahatma Gandhi, Pt. Jawahar Lal Nehru, Simanta Gandhi and Netaji etc.

Like any other city of Uttar Pradesh, Firozabad has long association with Indian history and it was ruled by different dynasties. Each ruler has left some architectural marvel in the city of Firozabad and all of them have become important tourist places of the city. They are Ashokan Pillars, Kali Masjid, Begumpur Mosque, Bijai Mandal, Bara Khamba, Khikri Masjid and others. Most of these were built during the reign of Firoz Shah Tuglaq during his reign.

The two sandstone pillars having inscriptions of the great Ashoka are the most popular tourist attraction of Firozabad. These pillars were brought from the cities of Meerut and Ambala by the great Tuglaqi ruler Firoz Shah Tuglaq.

This famous mosque of Firozabad was built during the period of 1368 AD to 1387 AD by Khan-I Jahan Junan Shah who used to work under Firoz Shah Tuglaq. As the mosque has got dark appearance, it is also known as Kali Mosque. The mosque has the architecture resembling a citadel so that worshippers are always protected from any attackers from outside. Near the entrance of the mosque, there are two tall towers. The mosque is about 62-ft-high and can be reached after climbing 32 stairs. The mosque is located near Firozabad Railway Station. There are 15 donned bays present in the prayer hall of the mosque and they are arranged in 5 rows and 3 aisles. The inner surface of the mosque dome is green colored and plastered.

This Jain Temple is dedicated to Bhagwan Rishabh Dev and is considered as a holy place for all Jains. The place was visited by Baba Rishabhdas of south India. The sage Baba Rishabhdas from south India visited this place during 15th century. The Shri Marsalganj Digambara Jain Teerth Kshetra located in UP is also known as “Places of Miracles” or Atishaya Kshetra and is located about 21 km from Firozabad. A magnificent temple got built under the supervision of Baba Rishabhdas in the place of the old Jain Temple. It is believed that no money was collected to by the sage for the temple yet every evening workers were paid their wages. After the temple got built, the “Pratishtha Mahostsav” function of the temple was done. The sage was known for his miraculous power and had excelled in Tantra. Many devotees come here to offer their prayers and have their desires fulfilled.

The temple is an architectural marvel and is built over a vast area. The idol of Bhagwan Rishabh Dev that is installed here is about 1000-year-old and is white in color. The idol is sitting in the posture of Padmasana.

There are two beautiful altars in the temple with the images of Lord Neminath and Lord Shantinath. Both the idols have beautiful carving. There are five gateways surrounding the temple along with a boundary wall. The five gates are - Dualat Dwar, Manik Dwar, Abhaya Dwar, Vijay Dwar and Rishabh Dwar.

Agra, Vrindavan, Delhi, Jaipur, etc are some of the important cities that visitors could go from Firozabd. Agra has famous monument The Taj Mahal, the Agra Fort, the tomb of Itimad-ud-Daulah, Fatehpur Sikri, The Akbar’s Tomb, Moti Masjid, Jama Masjid, etc.

Vrindavan is an important religious place near Firozabad and is visited by devotees to offer prayers to Lord Krishna.

When tourists come to any place, shopping is a must part of it. The same hold true for the visitors of Firozabad. Firozabad is famous for its glasswork. Glass beads used in jewellery items as well as in clothes make them look gorgeous. There are some famous markets in Firozabad named Shastri Market, Sadar Market and Azad Market. Excellent glass products like candle stand, Christmas trees, bird images, fruits, mini trees, gods and goddesses, famous personalities as well as domestic glassware like drinking glass, dinner sets are must to buy from here. Bangles and other jewellery items made of glass are also famous collectibles from Firozabad.

How to Reach Firozabad

Firozabad is well connected to the important cities of Uttar Pradesh as well as surrounding states and the Capital Delhi. Road as well as rail and air can be used to travel to Firozabad city.

Firozabad being 40 km from Agra and having located on the National Highway 2 is well connected to other parts of Uttar Pradesh. Delhi and other adjoining areas have many bus services to reach Firozabad. Intra and inter-state bus services are there too. There are private buses as well as state buses running to Firozabad.

Within the city, there are various means of transportations like rickshaws, auto-rickshaws and bus services.

Agra Airport is the nearest airport of Firozabad. People can easily come to Firozabad from Agra Airport. To take international flights, tourists have to reach Delhi International airport so Firozabad could be easily reached by overseas tourists. Regular flights from the rest of the India connect Firozabad City.

Firozabad Railway Station is part of the Delhi-Howrah route of Indian Railways. Many important trains run through this railway station and connect it to important places of India. Places like Howrah, Patna, Jamshedpur, Delhi, Agra, Tundla, Jaipur Mumbai, Kanpur, Jammu Tawi, Lucknow, etc. have regular trains to Firozabad. Tundla, another important junction station, is located only 20 km away from Firozabad. People could get down at Tundla Station and reach Firozabad.

The weather of Firozabad during the summer months is extreme and the highest temperature reaches about 45 degrees. The best time to visit Firozabad is during the winter months of October to March when weather becomes pleasant.