Situated in the western part of Uttar Pradesh, Firozabad is one of the most important commercial centres of Uttar Pradesh. Being located just 200 km away from Delhi, the city is also popularly known as “City of Glassware” or “the City of Bangles” because of its extensive glass works of all types. Firozabad attracts visitors from all over India as well as outside India for its famous glasswork and rich cultural heritage. Since 15th century, Firozabad has been the home of glass industry. Different types of glass products like bangles, chandelier, dinner sets, storage containers (containers for perfumes, itra, etc), ornamented phials are produced here. There are more than 500 small-scale glass factories in Firozabad and 50% of these beautiful glass products are exported to other countries.

Other glass works like miniature models, candle stands, small toys, glasses, labware, etc are also manufactured here in Firozabad. In the recent time, Firozabad is also called “Suhag Nagar” because different types of items for the brides and/or married women i.e. bangles, kangans, kadas, etc are made in Firozabad. 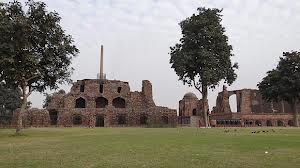 Firozabad mesmerizes visitors with its colorful and rich history and cultural heritage. The city was initially known by the name “Chandwar Nagar”. The city was part of the Mughal Empire. It was renamed as “Firozabad” by Emperor Akbar after his mansabdar or general named Feroze. Feroze was sent by the emperor to conquer the thugs and bandits by whom the region was inhabited at that time. Emperor Akbar took the initiative on the request of Raja Todarmal who was looted by the thugs while passing by this area when he was on his pilgrimage journey to Gaya. The city still has the tombs of Firoz Shah, the Mansabdar and ruins of Katra Manihar.

During the rule of Shahjahan, Firozabad was bestowed as a jagir to Nawab Sadulla. The place was ruled by Jahangir between 1605 and 1627. Firozabad along with Mainpuri, Budaun and Etawah were ruled by Emperor Farrukhaisar’s first class general or mansabdar.

During the rule of Mohammad Shah, Bajirao Peshwa looted Etmadpur and Firozabad in 1737. Firozabad was also ruled by the Jats during early years of 18th century and then with the help of Marathas, Himmat Bahadur Gusain ruled Firozabad. Next were the French who ruled Firozabad during late 18th Century and an ordnance factory was established here. Later the British took over Firozabad from the French and made it the part of Aligarh district.

Firozabad had an important role in the Indian Freedom Struggle. Along with local Malahs, Chandwar Zamindars and Chauhans of Maunpuri actively took part in the Indian Freedom Struggle in 1857. The British Government had sent the famous Urdu poet Munir Shikohabadi of this region to Kala Pani. During Quit India Movement, Namak Satyagraha and Khilafat Movement, Firozabad people participated in huge numbers. The place was visited by famous Indian leaders like Father of the Nation, Mahatma Gandhi, Sri Jawahar Lal Gandhi, Semant Gandhi and Netaji. In the year 1989, Firozabad district was established.

Firozabad is known for the scorching summers and the chilly winters. The lowest temperature recorded in Firozabad is -10C and 480C was the highest. The hottest months in Firozabad are April-June and the winter remains from November-March. The months those experience the rainy season are July-September.

Apart from showcasing varieties of glass items that get appreciated throughout the world, Firozabad has got some important tourists places that attract hundreds of visitors.

The mosque was built by Khan-i-Jahan Junan Shah during the period 1368-1387. Firoz Shah Tughlaq was the last sultan of the Tughlaq Dynasty and Khan-i-Jahan Junan Shah was a vizier in his court. Firoz Shah Tughlaq had laid the foundation stone of the city in 1354. The Kalan Masjid is also known as Kali Masjid. Near the entrance of the mosque, there are two tall towers and 32 steps are there to rich the mosque.

Another important place of interest in Firozabad is Marsalganj Jain Temple. It is located about 21 km away from Firozabad. People especially the Jains come here to offer their homage to an idol of Bhagwan Rishabdeo that was installed here by Baba Rishabdas.

Some other interesting tourist Spots in Firozabad are:


The other tourist places around Firozabad are:


Tourists can easily reach these places by road and rail.

If you are a lover of glass items then Firozabad is the right place for you. The city has an enriched history behind its being the city of bangles. Women who love to wear colorful and designed bangles must give a visit to Firozabad. It’s astonishing to know that there are more than 400 hundred industries for manufacturing glass wares are registered in the city. Some of the places those are well known shopping places in Firozabad are: Anam Bangle Stores, Sadar Bazar, Shastri Market, Agarwal Market, Azad Market, Municipal Market, Hiralal Market, etc

Firozabad is culturally rich with its festivals those are celebrated with great fun, enjoyment and grace. The most common festivals those are very popular in Firozabad are Ganga Festival, Bhaiya Dooj, Ahoy Ashtami, and Karva Chauth. On the day of Karva Chauth all married women keep fast throughout the day till the moon rises. They complete their fast by looking at the moon through a clear sieve and then look at their husband. It is observed in the Karthik month on krishna Pakha. Bhaiya Dooj is celebrated the next day to the Diwali.

How to Reach Firozabad

Firozabad is easily connected to the important cities of Uttar Pradesh through road and rest of the India through road, rail and air.

Firozabad is only 40 km from Agra, located on National Highway 2 and is also near to Delhi, the national capital. The city is well connected to various parts of Uttar Pradesh, especially the Western and Eastern parts. Inter-state bus services (AC, non-AC, deluxe, semi-deluxe) are available between Firozabad and states like Madhya Pradesh and Rajasthan.

Within the city, people could travel to various places using rickshaws, auto-rickshaws and bus services.

The nearest airport of Firozabad is the Agra Airport. From the airport, transports are available to reach Firozabad. Those who want to take international flights can easily go to Delhi where both domestic and International Airport is located. This makes Firozabad easily reachable to the people coming from outside the country.

The weather during the summer months is extreme and reaches about 45 degrees. The best time to visit Firozabad is during the winter months between October and March when weather remains pleasant in this city.